From the SIC Report
for the full report go to:
http://www.rna.is/media/skjol/RNAvefKafli2Enska.pdf

During a hearing, an owner of one of the banks, who also had been a
board member of the bank, said he believed that the bank “had been very
happy to have [him] as a borrower”.2
Generally speaking, bank employees
are not in a good position to assess objectively whether the bank’s owner is a
good borrower or not.

In 2008 the Prime Minister had quite a few meetings with the Chairman
of the CBI Board of Governors and the CEOs of the banks. During the
period from February until May 2008 Board of Governors had at least five
meetings with the Prime Minister, Minister of Finance and the Minister for
Foreign Affairs. Banking affairs came under the domain of the ministry of
Mr. Björgvin G. Sigurðsson, Minister for Business Affairs. He was not summoned to attend any of these meetings, in spite of the fact that the problems
the banks were facing and the liquidity crisis were being discussed there. In
addition, the Minister of Business Affairs was apparently neither informed of
the meetings, nor was he informed of what took place during the meetings,
with one exception, since he was informed of a meeting that took place on 7
February 2008 in a Social Democratic Alliance parliamentary group meeting
on 11 February 2008. As the leader of the government, the Prime Minister
had the responsibility to inform the Minister of Business Affairs of the aforementioned meetings so that he could attend to his duties.

During this period when it was becoming patently clear the banks had a serious problem UBS issued this report :

We leave you to draw your own conclusions !

The WUB clearly is of the opinion that already by the end of 2007 PwC knew the bank’s position was a lot more precarious than the accounts showed.

According to a presentation to a Landsbanki creditors’ meeting in December 2010 the bank’s capital had fallen below the legal limit before its collapse in October 2008 – probably already before the end of 2007.

The presentation implied that the managers had given the auditors WRONG information.

Landbanki’s two CEOs have already been sued for damages caused to the bank.

According to Ruv, the WUB has now gone a step further, suing the auditors.

The role of the banks’ auditors is scrutinised in the SIC report with many examples of highly questionable actions. It also raises questions, raised with international banks, on the relationship between banks and auditors.

The WUB claims the auditors knew these loans either had no or insufficient collaterals.

In spite of this and knowing that the bank was insufficiently capitalised the auditors went along with the managers in signing misleading and wrong annual and quarterly accounts.

If the accounts had been truthful the bank would have failed in 2007.

Icesave was the internet banking operation of Landsbanki. By offering high interest rates, this racket attracted lots of deposits in England and Netherlands. Money “disappeared”, causing the collapse of the operation. England and Netherlands want the working people of Iceland to pay for the losses. But are careful not to mention the billionaires who ran this racket. This is the story of economic parasitism on a massive scale. 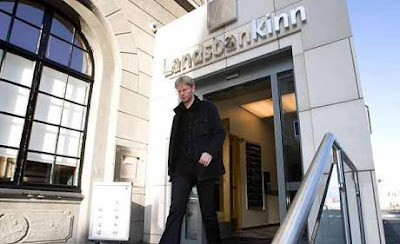 “Landsbanki – the National Bank of Iceland – was privatized a few years ago and sold to a father-son team, Björgólfur Guðmundsson and his son Björgólfur Thór Björgólfsson.” (Where are the owners of Landsbanki?, The Iceland Weather Report)

Mr. Guðmundsson married Thora Hallgrimsson. She was well connected: “Her father was head of Shell Iceland; one uncle was an ambassador to the United States in the 1940s, while another the prime minister on five occasions up to 1963. Her former husband, George Lincoln Rockwell, with whom she had four children, founded the American Nazi Party in 1959″. (Jamie Jackson, He’s the real thing, The Observer, 2 Sep 2007) Readers will want to learn about Shell’s founder, who was involved in shipping, here.

Just like Mr. Guðmundsson, who came into ownership of “Hafskip was Iceland’s second-largest shipping line before its collapse which became a national scandal.” (Hafskip, Wikipedia)

And how could a shipping company “collapse”? 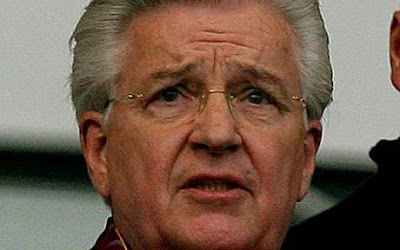 “In May 1986, police arrested Björgólfur Gudmundsson and serveral other executies of Hafskip in early-morning raids on their homes.”

“Björgólfur Gudmundsson was also charged with embezzling sums from the company’s cheque accounts and charging personal costs to the company.” 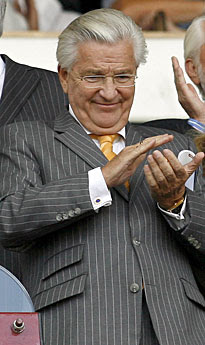 “He was also charged with embezzling bills of exchange from the company’s portfolio for his personal benefit.” “Björgólfur and the other defendants were found guilty of these charges by the Icelandic supreme court judges – but only partly so.

COOKED THE BOOKS / AND NOT TOO SAD ABOUT IT

In preparation of the misleading first eight-month figures and full-year accounts of 1984, the defendants were found to have violated articles of the Companies Act, but not the more serious General Penal Code.

Björgólfur Gudmundsson was found to have violated the General Penal Code over several counts of embezzlement, two of which involved fraud.” (Questions over Landsbanki’s new shareholder, Euromoney, 1 Nov 2002)

During May 2012 the victims of this scam published a press release under the title of “Is Luxembourg Morally Bankrupt ?” which received large coverage in Luxembourg and France. Amongst  those articles PaperJam quickly published a response from Mme Hamilius to our press release.

where she tried desperately to put her case. It carried little weight for the victims of this travesty.

One cannot but wonder what could have prompted this type of response. After all there had not been much time to make enquiries before making this amazing statement. One can only surmise that there is a lot to be covered up in this particular scandal.

And then the following blog site has some useful insight into what we were all dealing with when we got conned into this terrible scam.